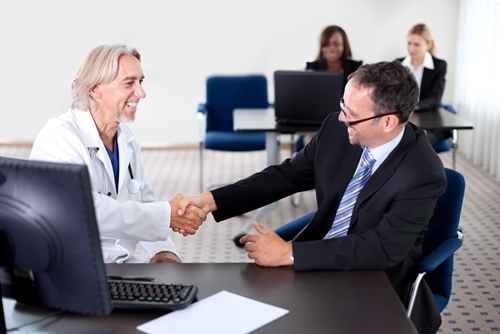 The Affordable Care Act (ACA) has levied a series of regulations that health care providers, insurers and employers have had to grapple with in recent years. In some cases, it's become difficult for providers to generate the revenue necessary to remain effective – or even in business – given the nature of these new restrictions. To stay on the exchange and generate adequate capital, a number of payers (insurers) have attempted to merge – both successfully and unsuccessfully.

Additionally, by consolidating and amassing scale, carriers can provide more expansive Medicare products – a huge area of growth, as 10,000 people over the age of 65 retire into Medicare every day. Scale allows providers to generate more consistent profits.

Big mergers under review
Currently, the two headline-making deals involve Aetna and Humana on one and Cigna and Anthem on the other. The deals are far from certain, however – in July, the U.S. sued to block the mergers from taking place, citing antitrust regulations, according to The New York Times. The Department of Justice and  Securities and Exchange Commission are the governing bodies that will determine the viability of the mergers.

Meanwhile, hospitals and health centers themselves are also discussing terms of consolidation for largely the same reasons: scale, efficiency, and improved care for a larger group of people. With higher cost pressures coming from Medicare and Medicaid, large scale is necessary to squeeze reimbursement levels.

For example, in Pennsylvania, Lancaster General Health and Pennsylvania Medicine successfully merged. On the other hand, Hershey Medical Center and PinnacleHealth System sought to come together but various governing bodies  blocked the move. The groups may challenge the ruling – their future is yet unclear.

On yet another level, larger insurance providers and health care groups have been buying up smaller organizations. Ultimately, all of these moves are aimed at helping to cope with this new, more intensely regulated post-ACA environment.

With that said, clearly this kind of consolidation is far from a guarantee. When Aetna purchased Coventry in a prior deal, it was important that the acquisition didn't create too much of a market share. The committee in charge of approval might have required one of the companies to shed assets, had that been the case. If such a deal doesn't go through, one or the other might then seek to acquire smaller organizations instead.

How does consolidation help carriers?
In short, it's difficult to hit margins in this day and age because of the nature of the ACA and other regulations. In a way, products on the exchange are like a regulated utility – insurance companies' profit is capped, while it's also a risky move to offer products on the exchange. In many cases, organizations would prefer to withdraw from the exchange altogether than to lose money by offering limited products.

By merging with other carriers and organizations, these groups can push their capabilities far enough to generate enough scale to make money on the exchange, turn a profit and remain compliant at the same time.

Employers should make sure to stay on top of these kinds of health care industry events, as the insurance and care provider landscape morphs. Those moves have lasting impacts on how employers organize their health benefits and how HR teams advise employee decisions. By partnering with a third-party advisor, employers have an easier time tracking changes that affect them and remaining compliant with any new regulations or circumstances that emerge thereafter.